A deadly mass shooting and Las Vegas Tourism – there are some consequences and challenges. Forwardkey is analyzing the initial effects on the Las Vegas Visitor’s industry.

Is Las Vegas Tourism in trouble? Obviously, after deadliest mass- shooting in Sin City some challenges are expected and they are real, but serious trouble may not be on the horizon. The Las Vegas visitors industry is resilient.

The horrendous mass shooting that took place on 1st October in Las Vegas when Stephen Paddock opened fire on concert-goers from his room on the 32nd floor of the Mandalay Bay hotel has triggered a setback in flight-bookings to Las Vegas. The analysis has come from ForwardKeys, by analyzing around 17 million flight booking transactions a day.

In the eight weeks prior to the tragedy, domestic air bookings for Las Vegas were already down 7% on the equivalent period the year before, whilst international bookings were 2% up.  In the three weeks following the horrible events of October 1st, bookings collapsed; domestic flight reservations fell 21% and international reservations fell 16%, compared to the equivalent period in 2016. 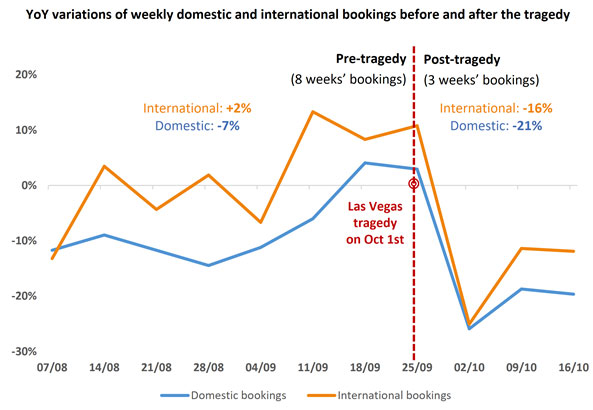 An analysis of origin markets shows negative swings of between 13% and 27% across the board. The worst domestic drop has been in bookings from San Francisco and New York. In the eight weeks prior to the tragedy, they were 6% down and 3% down respectively; in the three weeks post, they were 33% down and 29% down. In international markets, the most dramatic swing was in bookings from Asia Pacific, which were 10% up prior to the massacre and fell to 10% down after it. Bookings from the Middle East were already 26% down and they fell to 41% down, benchmarked on the equivalent period in 2016. 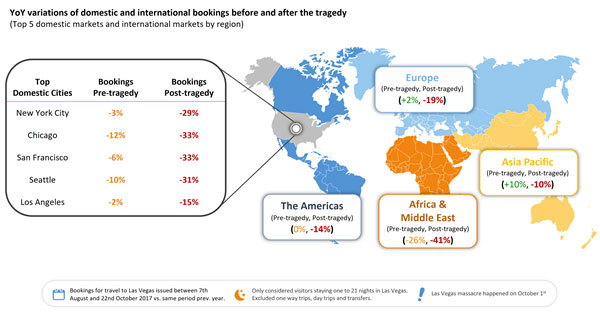 Looking ahead for the next six months, bookings for air travel to Las Vegas from 1st November to 30th April, are behind where they were at this point last year. Prior to the tragedy, domestic bookings were running 10% behind; now they are 14% behind. International bookings prior to the tragedy were 1% ahead; now they are 2% behind. In almost every source market, with the exception of Australia and Brazil, bookings for Las Vegas have slowed.

Olivier Jager, CEO, ForwardKeys said: “Looking at the current situation, one can only feel sympathy. What has happened to the victims of the shooting is absolutely shocking and tragic. One also feels sorry for all those people who work in Las Vegas too, they are dedicated to showing visitors a good time and it must be very hard to keep doing that in such awful circumstances. Nevertheless, whilst reservations for the coming six months have fallen back; it is not a certainty that the market will stay down. If the US economy picks up; if there are no more similar incidents and if there is a brilliant promotional campaign by Las Vegas, it is possible that the situation can be turned around.”